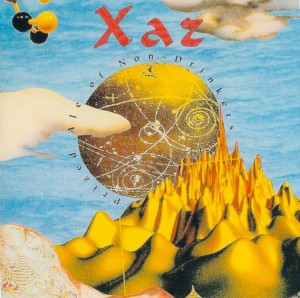 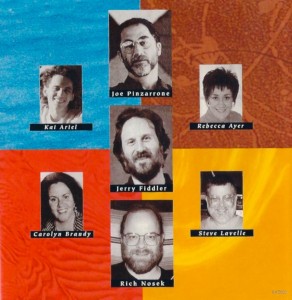 Some notes about the Xaz CD…

Xaz is Joe Pinzarrone, Roch Nosek, and me. Several friends joined us on the CD as well, as shown. Joe plays piano, and was one of my music professors long ago when I was in school at U of Illinois. He is now CEO of Prism Logic, having left academia after many years. I also know Rich, the bass player, from U of I. He now works at Lawrence Berkeley Lab. The three of us have played together just for fun over the years. We released the CD in 1996.

All the pieces are written by the three of us.

The album name “Prized Ale of Non-Drinkers” is an anagram of “FiddlerNosekPinzarrone”. The computer came up with thousands of anagrams, including such bizarre creations as “Personalized Dinner Fork”, “Frozen in Red Leapord Skin”, and “Frenzied Spinnaker Drool”. It must mean something, but I don’t know what.

It took about two years to do the recording, which was all done in our friend Steve Lavelle’s little studio in his Oakland loft. That time included periods of considerable activity and long hiatuses. Rich, Joe, Kai Ariel and I laid down all the basic tracks in about 10-15 sessions over a month or two. The rest of the time was overdubs, adding parts, mixing, etc. This was all done on a 16-track analog machine, hopefully the last recording I’ll ever do that way. When we were done, we mastered it at Rocket Lab in San Francisco, which was a one day process.

Paul Shimandle, a friend in Chicago, did the art used on the cover. Paul designed and mailed the piece to me, which is shown on the back. Rich and I used that to design the cover, place the text, excerpt a piece of it for the front cover, etc. The miracles of Photoshop.

The instruments include piano, bass, percussion, viola and lots of guitars – classical, acoustic, electric, and a guitar synthesizer. Using the synth, I can make the guitar sound like almost anything. The trumpet on .666, the clarinet on Twin Chimneys, the “shakuhachi” on For Kathryn, and the weird lead sounds on Boiling Lake and Damascus Gate are all the guitar synth, as are a number of other sounds scattered about. It’s mostly on my John Gray solid body, but Alissem is on an acoustic steel string, Compression is played on a nylon string acoustic, and the non-synth guitar on For Kathryn is a beautiful Gibson ES-335 that was lying around the studio. 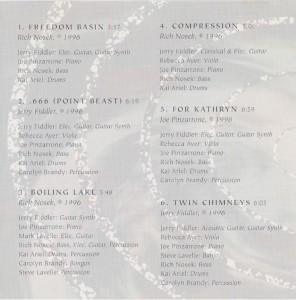 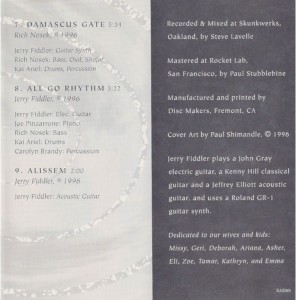